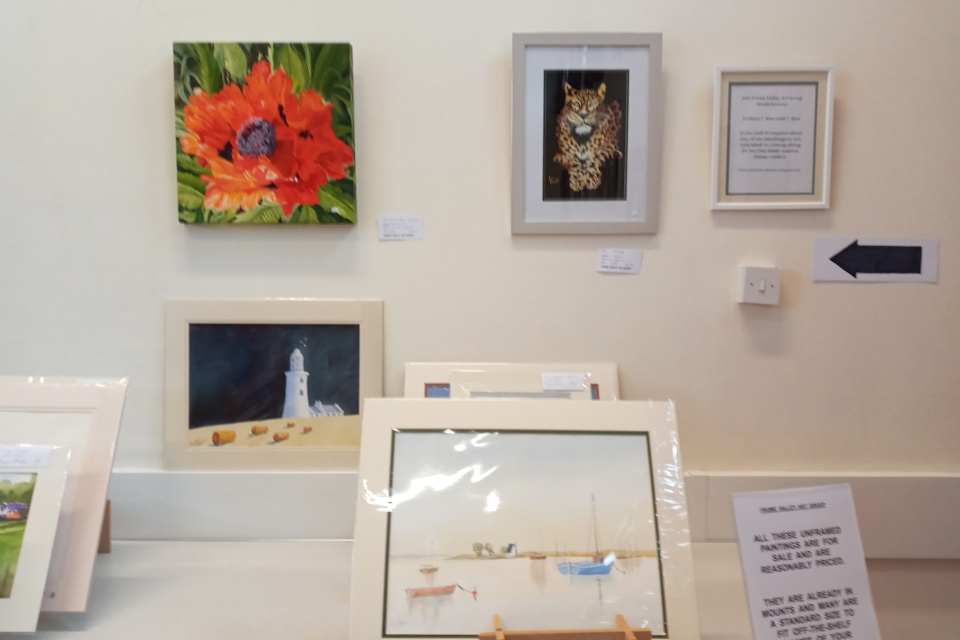 It has been a busy month for me to date, leading up to my art group’s 25th Annual Art Exhibition. I was delighted when the committee asked if they could use one of my paintings (“Sunflowers”) on the advertisement poster, placed in local newsletters, on many sites and pages on the internet, and in local shops and libraries.

For me this year, the hardest part was in deciding …Read On 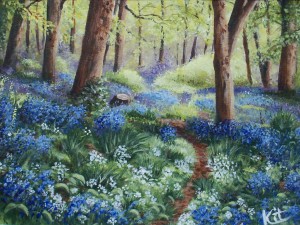 Back last autumn, a local junior & infant school asked if local businesses would consider donating a “prize” for auctioning at their annual fundraising ball scheduled for January 2020. I offered one of my paintings, especially as it was pertinent to the local area, being a framed scene of our local bluebell wood, a few yards from my home.

Once part of a large woodland, this small copse, known as Gorse Covert, sits on the edge of a local open area and park. The covert is maintained by local residents and boasts a small pond with fish, frogs and newts, plenty of birdlife including woodpeckers and owls, and populated by foxes and grey squirrels. When the native natural bluebells are in bloom, the covert is a delight to walk through, for the flowers and the gentle perfume wafting in the air. As many of you know, I love bluebells, so I have plenty of inspiration right on my doorstep.

The school was delighted to accept my donation of “Gorse Covert Bluebells”, which sold at the auction, exceeding the reserved price and helping to raise a considerable sum for their coffers and making me one happy artist. 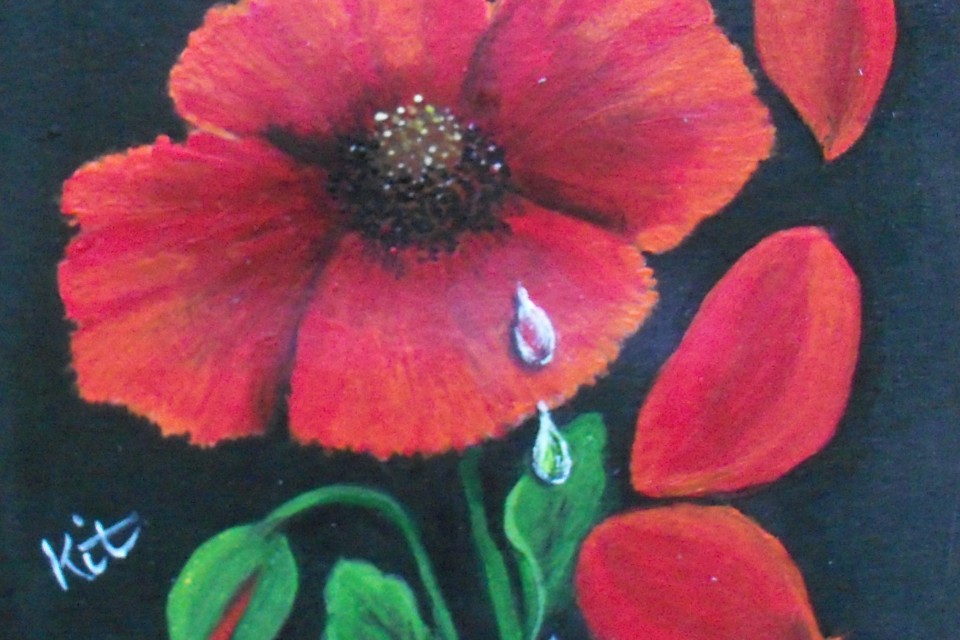 This year, being the 100th Anniversary of World War One, the SAA decided to mark the occasion by holding a Paint a Poppy Challenge. Partnered with the Royal British Legion, it is a way to say “thank you” to those courageous men and women who served and sacrificed for our country and freedom. The idea is to gather as many poppy paintings and drawings as possible together to create a unique art exhibition to be held later this year at their headquarters in Nottingham, as well as raising funds for the work the Royal British Legion does, by monetary donations from those taking part in the challenge.

The challenge was open to everyone, in any medium on any paper as long as it measured exactly 125x125mm (4.9×4.9 inches). As well as individuals, SAA art groups were able to send in group entries. Being a member of SAA Frome Valley Art, based in Winterbourne, South Gloucestershire, I decided to take part. I love a challenge, and this was undoubtedly one.

As much as I enjoy painting detail, producing a small painting is a lot harder than one imagines. First, was deciding precisely the image I wanted to create. I wanted something different from the usual poppy flower scene, one that not only reflected the simple beauty of the flower, but also the immense emotion evoked by this memorial event.  I’ve painted several poppy pictures in the past and wanted something different, one that had meaning. I thought long and hard, and unusually for me, painted many draft pictures until finally deciding on the one that for me, worked.

First,  a black background – to represent death and mourning as per the black-bordered telegrams families of those fallen often received. Also, using a black background accentuates the flower’s vibrancy, popping it out of the image. It called for a poppy in bud to represent the young age many of our soldiers were when called up to arms during conflict, some as young as sixteen.

I wanted a poppy in full flower, representing parents and families of those left behind, and I wanted falling petals, to represent those fallen in battle, a reflection too of the millions of petals dropped in various war memorial services, in mind particularly those dropped at the Remembrance service at  Royal Albert Hall, London.

Lastly, and for me the most important part, I wanted to add falling teardrops from the adult flower: tears for a son, husband, brother, uncle, grandfather who never came home.

After many weeks, my challenge attempt resulted in “Tears for the Fallen”. 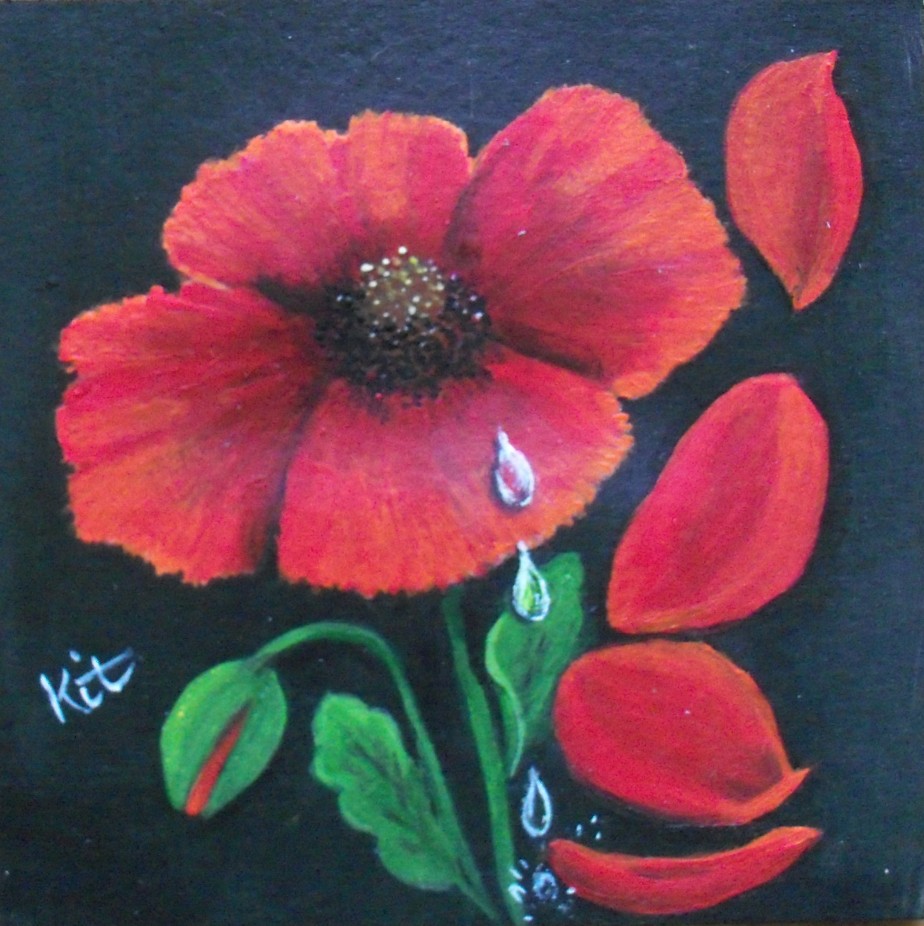 “Tears for the Fallen”

It’s doubtful I will be able to get to the exhibition although it will be available online at a later date (I’ll keep you advised).

In Nover 2018, I was delighted and honoured to have this painting and its story featured on “Yesterday Uncovered” blogspot. Thank  you, Pauline Barclay.

Back in late 2015, I took part in the World Record Challenge run by the Society of All Artists to create a display of the largest number of original works of art in one place. It was intended that entries would be mounted on a series of display boards, showcasing every card received. There was no prize involved. The challenge was open to all members of the SAA worldwide, professional or beginner, any art group, art tutor, family and friends, there was no age limit – anyone could take part. There were no rules other than the piece submitted had to be of trade card size 64mm x 89mm, (think business card size), on any theme and in any medium, and no limit on the number of pieces any one person could submit.

Sounds easy, right? No. I wanted to be part of this unique display but what to paint? Something simple? Something abstract? Something totally off the wall? It took me ages to decide, especially as I’ve never done anything so small and as most of my work includes lots of detail so the subject matter was a hard one, let alone painting it. In the end, I decided to go with an image which basically sums up my work, and that for which I am well known for producing. Yes, you’ve guessed it! I painted a miniature bluebell scene. One card, one entry… and duly sent it off. I wish I had painted a few more as the exercise of creating such a tiny piece of work was indeed challenging, and good for me. I learned a lot.

The submissions received amounted to over 32,000. Yes, that’s right: 32,283 to be precise. That’s 32,283 little cards to be mounted on what eventually became 70 boards holding around 480 miniature works of art, including mine. All the paintings can be viewed here: http://www.saa.co.uk/worldrecordgallery.

I have to admit when I looked at each and every painting (not all in one sitting, I might add) I was amazed at the quality of work. You can find my little effort on Panel 22, Row 20, Column E And I have to say I felt I had not done as well as I could have. It is not my best piece and perhaps I should have painted the underwater scene with jelly fish and coral I originally had in mind to do but hey, it doesn’t matter. I’m there, I’m part of it, as are over 10,000 other artists. Oh, all right. If you really don’t want to pop over to the site and trawl the boards, here’s my little effort. Not much, I admit. And yes, I could do better (to quote my art teacher at school) but I don’t care. It was worth it to be part of this marvellous and unique event.

The SAA has opened the exhibition to members to visit on special days; sadly I am unable to make the journey otherwise I would have loved to go up to Nottingham to see this spectacle. A lot of work has gone into this effort, both by the artists and the team at the SAA. I think it’s amazing and I thank them for giving all of us this opportunity to take part. I do hope it is run again with a view to breaking this record. Meanwhile, I’m working on what I can paint next time. 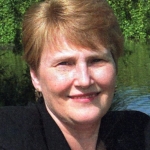